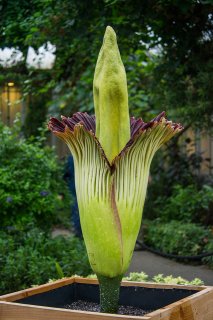 This charismatic species is commonly called the corpse flower and has evolved an interesting way to attract its pollinators. Native to the tropical islands of Sumatra and Java in Indonesia, A. titanum requires pollen from another individual for successful fertilization. To attract pollinators in the wild, the species emits a strong foul odor, which has been described as smelling like rotting fish, cabbage, or garlic, and is pungent and sour. The plant flowers at night, when the forest is cooler. The inflorescence heats up to over 95°F, creating a convection wave that disperses the smell over a larger area. This smell attracts beetles and flies that typically lay their eggs in decaying organisms and these insects act as effective pollinators. This species has the largest infloresence in the world, reaching over ten feet tall! Unfortunately, A. titanum is currently listed as Endangered by the International Union for Conservation of Nature (IUCN) Red List of Threatened Species and there are fewer than 1,000 individuals left in the wild. Oil palm and timber plantations are some of the leading causes of deforestation that threaten this interesting species. To learn more about the corpse flower, visit the Chicago Botanic Garden’s FAQ page.